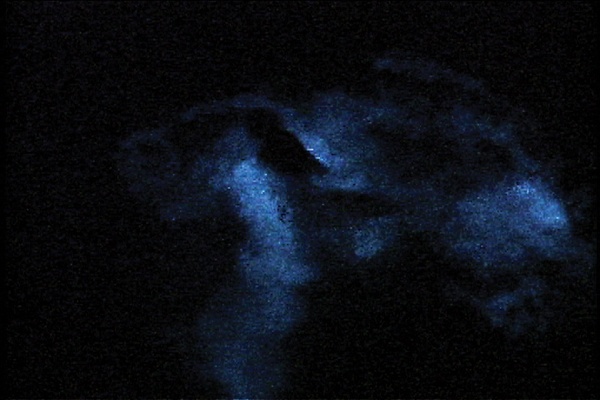 FIELD NOTES presents work by artists interested in the role subjectivity plays in scientific research, how a collector influences a collection.  Employing a methodology similar to the field note—the notes detailing events leading up to the biological specimens’ collection and inform its final classification—these three artists question perception’s role in knowledge production; they examine the gap between rational scientific systems and human idiosyncrasies.

Rosamond Wolff Purcell’s photographs evidence an obsession with methods of display.  For nearly 40 years, Purcell has photographed hundreds of collections around the world, ranging from Peter the Great’s kunstkammer, Rothschild’s Birds of Paradise, and magician Ricky Jay’s collection of dice.  Purcell’s 20’ x 16’ C-Prints document the procedures leading up to an organism’s designation as a specimen. Her images are conduits in which the entire history of museological concerns are reflected.

The center bulletin board panel contains Rich Pell’s series, Collected from Within, which catalogs organisms living inside the Smithsonian National Museum of Natural History in Washington D.C. These organisms were captured or discovered by staff and formally added to the collection.  Grackle, for example, depicts a dead bird whose label details that the specimen was collected by Roxie [Smithson] Laybourne, originator of the science of forensic ornithology and founder of the feather identification program, after she discovered it in front of the museum mortally wounded by a Sparrow Hawk in 1953. Bat was captured by James Mead, curator emeritus of mammals, whose groundbreaking research on whales and dolphins is of great value to cetacean systematists.  Often concerned with the complex interplay between culture, nature, and biotechnology, Pell’s recent work explores varieties of life normally excluded from scientific taxonomy.

Luna del Mar, Cameron Keith Gainer’s filmic representation of organisms in the deep sea reflects the artist’s child-like fascination with the living world in a way that engages a not-so-child-like formal investigation.  Originally shot in 16mm format and transferred to DVD, Luna del Mar will be screened in the vicinity of the exhibition space. Sparked by an initial interest in Pyrodinium bahamense, a bioluminescent organism specific to the region of the coast of Puerto Mosquito, Vieques, Puerto Rico, Gainer’s research led him on a journey that culminated in a captivating 16mm film that is, in his words, “a filmic representation of deep space created by choreographing millions of single-cell organisms through the movement of an Olympic synchronized swimmer named Luna del Mar.” His work approaches nature on a formal level, and coupled with desire to know more, the work exhibits the compulsion to flex between the “big idea” and one’s personal experience; it explores the boundaries between what we know and what we know of.

The artists presented in Field Notes explore the ways in which the natural world is presented and perceived, and how our perception of the natural world is historically contingent; that is, how perception changes over time. They are not interested in using the camera as a mere tool of transcription, as a transpersonal method of capturing the natural world, but rather as an instrument for construction or re-construction. By observing the world as a set of images, these artists use mechanical modes of perception to alter the way knowledge is acquired. At the heart of their work, these artists share an interest in stories and story telling – in accidental circumstances and the experiences that come with them. Traditional natural historical practice makes claims of objectivity and beauty; it utilizes modes of presentation and methods of collecting to construct a fixed idea of the natural world.   The work of Purcell, Pell, and Gainer captures specimens as they are collected in collections: historical, institutional, and naturally subjective.

Rosamond Wolff Purcell (b. 1942) photographic work is involved with issues of traditional museum conceits: classification, juxtaposition of words and objects, the relationship between collector and curator, “the grey area between a rational scientific system and human idiosyncrasies.”  Purcell has collaborated frequently with paleontologist, evolutionary biologist, and natural historian, Steven Jay Gould and her works have appeared in numerous science and literary publications. She currently lives and works in Somerville, MA.

Rich Pell (b. 1975) is a founding member of the highly acclaimed art and engineering collective, the Institute for Applied Autonomy. His work with IAA includes several robotic, web and biologically based projects that call into question the imperatives that drive technological development. IAA projects such as the robotic GraffitiWriter, iSee and TXTmob have been exhibited in art, activist and engineering contexts such as the ZKM in Karlsruhe, Mass MoCA, CAC in Cincinnati, Australian Center for the Moving Image, Aldrich Museum of Contemporary Art, Hackers On Planet Earth and the International Conference On Robotics And Automation. IAA projects have been chosen for an Award of Distinction and two Honorable Mentions at the Prix-Ars Electronica in Linz, Austria and were selected for RES Magazine’s 10 Best New Artists of 2005. His narrative and documentary videos explore the individual’s relationship to authority. His most recent video documentary entitled, Don’t Call Me Crazy On The 4th Of July, won the Best Michigan Director Award at the Ann Arbor Film Festival in 2005, took 1st prize at the Iowa International Documentary Film Festival has screened in numerous festivals internationally. In 2007 Pell was awarded a prestigious Rockefeller New Media Fellowship for the establishment The Center for PostNatural History.

Cameron Keith Gainer  (b. 1973) received his MFA from the Tyler School of Art, Philadelphia, and a BFA from the University of Colorado, Boulder. He was a Visiting artist at the Institute for research in Art in 2008. Solo exhibitions of his work include the University of South Florida Contemporary Art Museum in Tampa Florida and the Fabric Workshop and Museum in Philadelphia. Recent screenings include the French Cultural Institute in Turin Italy, the Art Institute of Chicago, and the Pula Film Festival, in Croatia. Formerly from Brooklyn, he now lives and works in Minneapolis, Minnesota.