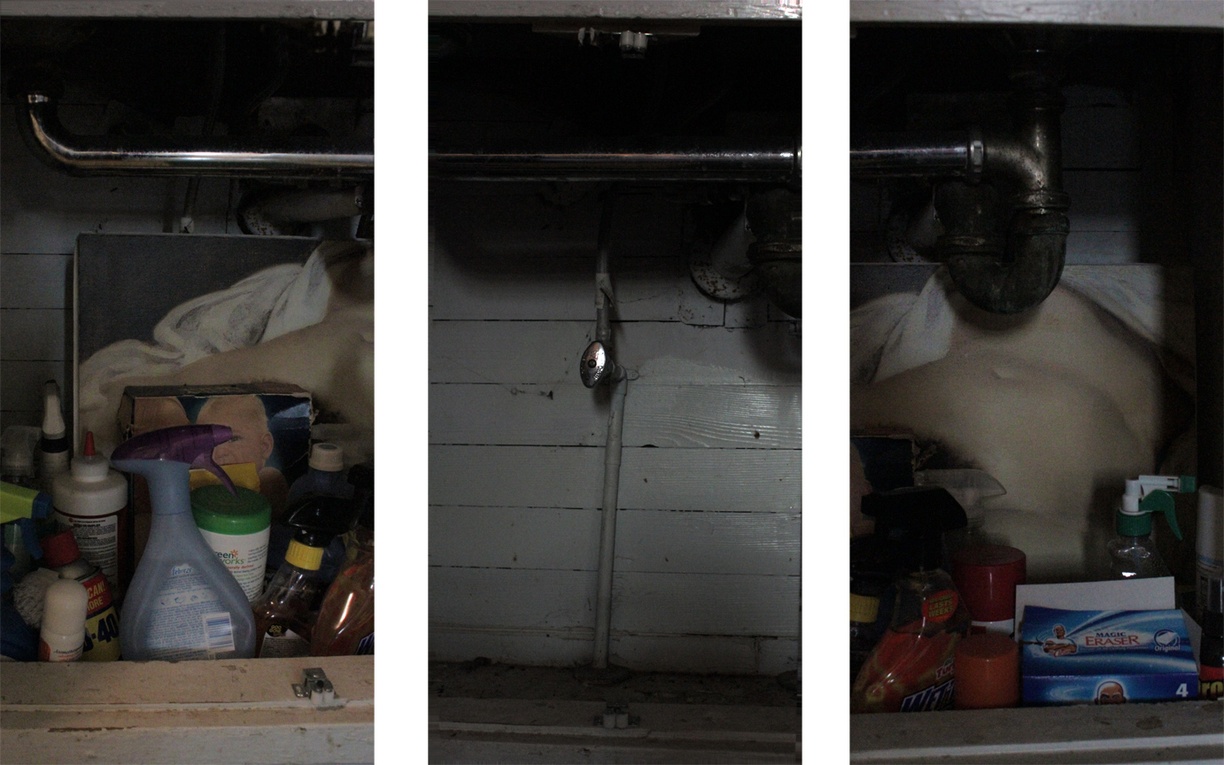 Scott Benzel is an avid collector of objects, ephemera, and stories. Using these materials, he is able to draw out narratives that link seemingly disparate elements. He is interested in the blurred distinctions between truth and fiction, particularly in the way mass audiences construct their mythologies. By drawing attention to a societal compulsion to produce tales of intrigue and heroic, yet tragic, figures, Benzel grasps at the origins of popular culture.

Several years ago, Benzel produced a “fake” proposal for the Musée d’Orsay Correspondences series. Never intending to submit the proposal for consideration, Benzel hypothetically used the conceptual structure of the series to engage in a dialogue with Gustave Courbet’s 1866 painting,L’Origine du Monde (The Origin of the World), a work from the museum’s collection of canonical, early modern art. Indeed, Benzel includes his own copy of L’Origine in Ivory Neige, L'Origine du monde, Magic Eraser, 2012, a photographic triptych of an assemblage of personal effects set into the space underneath his kitchen sink. His “fake” proposal for the d’Orsay enabled Benzel to construct his own relationship to L’Origine du Monde by pulling out threads imbedded in the painting’s provenance, punctuating them with pop cultural and personal reference points.

Prior to the Musée d’Orsay’s 1995 acquisition, the exact location of L’Origine was unknown. Shrouded in misleads, rumors, and hearsay, “it epitomized the paradox of a famous painting that is seldom actually seen.”1 In 1986, Linda Nochlin wrote that L’Origine “is known to us only as a series of repeated descriptions or reproductions – an Origin, then, without an original.”2 After seeing hundreds of reproductions during her unsuccessful search for the painting, Nochlin argues that L’Origine is identical to mass-produced pornography.3 Nowadays, postcards of L’Origine are one of the d’Orsay’s most popular gift shop items.[Mark Hutchinson, “The history of ‘The Origin of the World’,” Times Literary Supplement, August 8, 2007.}(footnote)

For the three-paneled form of the Bulletin Board at the Center for Curatorial Studies at Bard College, Benzel conceptualized a site-specific triptych for the atypical, yet mundane, exhibition space. Conceived as a sculptural installation of personal effects including cleaning supplies, a reproduction of L’Origine, and a vintage box of Ivory Snow laundry detergent, Benzel assembled these objects under his sink to be photographed for the Ivory Neige triptych.

With its odd play of light and shadow, the space beneath Benzel’s sink becomes an eerie setting for the uncanny assemblage of objects. The emptiness of the central panel identifies this strange space with a water valve and pipes as it simultaneously divides the triptych in half. Like a keystone, the center fuses the left and right panels which provide different perspectives of assemblages that are similar but not identical. The empty center is also a perceptual crawl space. Viewers may enter Ivory Neige through its center while they are visually barred from fully entering the reproduction ofL’Origine due to Benzel’s strategically placed box of Ivory Snow.

Here, he alludes to Art & Language’s Index: Now They Are series from 1992-93 in which the genitals in reproductions of L'Origine are covered with flesh-colored monochromes.5 In Benzel’s work L'Origine is obscured and abstracted by the fleshtones of the mother and child who appear on the Ivory Snow box cover. In fact, it is Chambers, who posed as the Ivory Snow mother, covering L'Origine’s X-rated feature. The producers of Behind the Green Door capitalized on Chambers’ wholesome Ivory Snow persona, ironically billing her as the “99 and 44/100% pure” girl.6

In Ivory Neige, Benzel layers references and correspondences to construct an interesting image and a good story. Beginning with a consideration of the image as palimpsest, that is, a writing surface that has been erased, reused, and altered as it retains traces of its earlier form, Benzel extracts points of contact between institutionalized art and pulp histories to create a multilayered record.

Scott Benzel  (b. 1968, Scottsdale, AZ. Lives and works in Los Angeles, CA) is an American visual artist, composer, and producer. Interested in the contradictions inherent in mythologized cultural histories, Benzel’s work shows an ongoing fascination with the disjuncture between embodiments of popular culture – from the classical music score to photographic ephemera – and their accumulated meanings. Undertaking research into the genealogy of seminal pop music and cultural moments, Benzel explores the processes and contradictions of mass media systems of production alongside the development of collective cultural imaginations and identification. His visual and sound-based artwork has been shown at The Los Angeles County Museum of Art, The Contemporary Art Museum of St. Louis, The Museum of Contemporary Art, Los Angeles, Performa 09, New York, Blum and Poe, Los Angeles, Human Resources, Los Angeles, The Santa Monica Museum of Art, Santa Monica, CA, The Western Front, Vancouver, BC, Mandrake, Los Angeles, and Art Basel: Statements. He collaborated extensively with the late Mike Kelley. He received an MFA in 2001 from California Institute of the Arts, and a BA in 1995 from the University of Arizona.