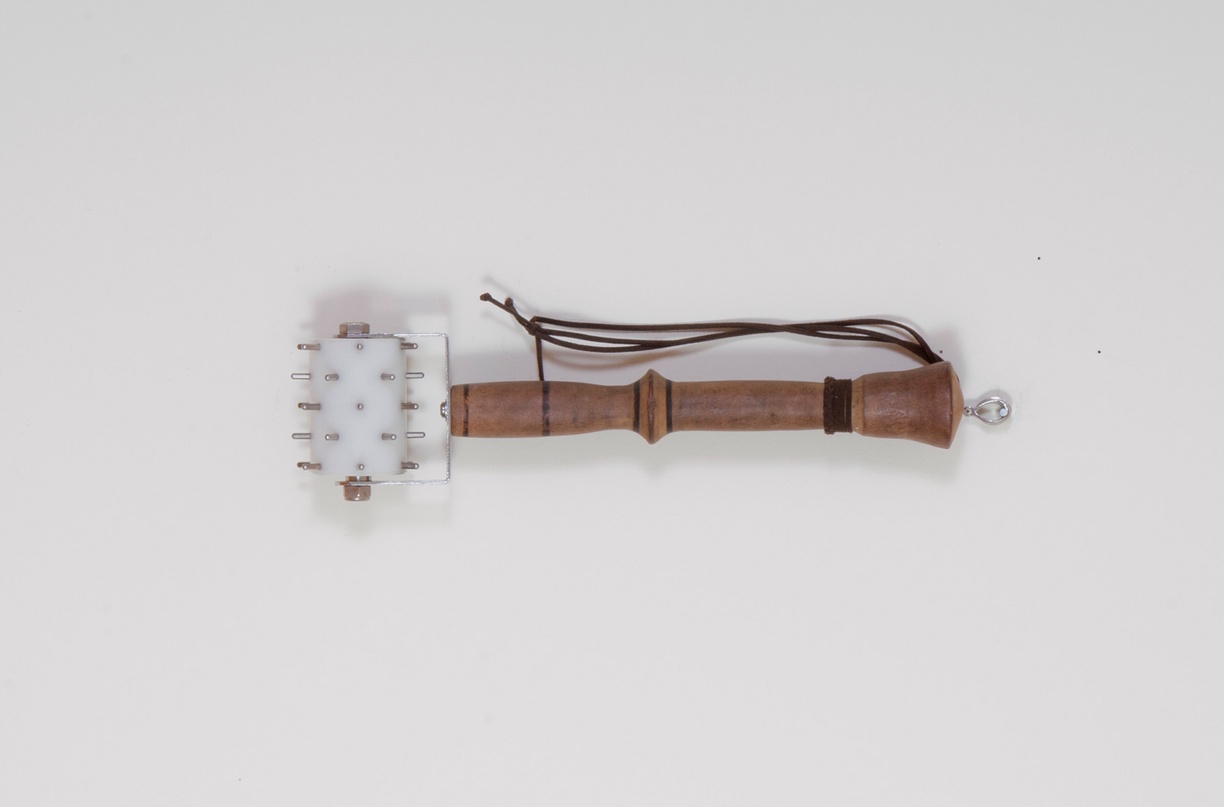 The faith, the pain, the pleasure. What appear to be three completely different sensations, are shown in a singular perspective to be not so distant from one other. The plenitude, the nirvana, the peace, reached through the sacrifice of the flesh. Lash, kneel, starvation, pray. The suffering of the body is the purification of the mind. What could be more pleasant than to realize that you are clean of all your thoughts?

Juan Betancurth’s work, For faith, pain or pleasure, investigates the boundaries of these sensations. Through the utensils he has created, Betancurth tries to demonstrate how people’s feelings and desires can lead to an encounter with the same objects in different ways. It all depends on the individual. Where should I put this? Where is the manual? What can I do with this object? No answers. It is totally up to participants to explore the functionalities of Betancurth’s objects, and through them, to discover ways of accessing their own inner compulsions. The restoration, the new, the ready.

The Czech philosopher and naturalized Brazilian, Vilém Flusser, in his book A Filosofia da Caixa Preta (or, in the English translation, Towards a Philosophy of Photography), discusses how the camera, as photographic apparatus, has technical capacities that determine the parameters of how to use it (viewfinder, set speed, aperture, frame and shoot). It is up to the photographer to go beyond that, to experiment with the apparatus in a way that is not limited by how and why it was originally constructed. Betancurth’s utensils lie in this further exploration of the apparatus itself: although the artist hand-crafted his utensils with specific, personal uses in mind, it is up to the user to explore how to handle each one in a new, unique, and personal way.

The interaction with the utensils is not an additional feature of the work. Quite the opposite. It is an integral part of this exhibition. When a utensil is not on display in the bulletin board, it is being used by someone, somewhere. What is he/she is doing with it? What is the missing object? What are the limitations of it? The participants are invited to write and display the testimonies of their experiences with their selected utensil within the exhibition space of the bulletin board. In this way, the public will become aware of how people are using the objects, along with their cumulative limitations and potentialities; and possibly they will be driven to develop yet another use for the utensil.

An important aspect of Juan Betancurth’s work is the site in which it is inserted. The space, depending on what it is, can cause different reactions and manifestations of the same work. In this case, the utensils make tangible the limits of how private desires can be explored in public contexts. It provokes the audience to investigate their own passions, fears and secrets. It opens new layers of interpretation of the specific exhibition space about and how to engage with it.

During the 2012 exhibition Dirty Looks: On Location in New York, Juan inserted his work Limpia, 2012, into a quasi-public space—a gay video booth inside a sex shop in Chelsea, NY—thereby creating a tension between private and public. In the two-minute video, a man uses a fabric mask with a brush to clean himself. The work was programmed on one of the channels of the video booths, surprising clients with a very slow and contemplative work (an obvious counterpoint to the huge range of pornographic options). By deciding to screen Limpia in this way, Betancurth allowed it to have new values and meanings, and forced the audience to have the same experience of the gay men that frequent the sex shop to cruise or watch porn.

A similar context-specific approach could be seen in a walk that Juan co-organized together with Todd Shalom, director of Elastic City, an organization intended to create poetic exchange between the participants and the places we live in and visit. As part of Carlos Motta’s 2012 exhibition at The New Museum, We who feel differently, Shalom and Betancurth organized what they called Sketchy Walk, the goal of which was to recreate the cruising environment that defined the Bowery neighborhood ten years ago. Just a simple walk through a region gave a new layer of interpretation of how private desires are manifested in public environments.

Betancurth’s context this time is a bulletin board, a space to be reconfigured, altered, customized. In this instance, the focus of Betancurth’s work is the interaction of the public with his utensils. What motivated someone to use that object? How far can someone go with it? And if someone gets hurt?

Responsibility for the utensils will be given over entirely to the audience participant. It will be their duty to return the work, or not. They will be accountable for breaking, damaging or losing it. Will the utensils still be on display after four weeks of exhibition? And how many people will have the courage to share their testimonies in the public space of the bulletin board?

Juan Betancurth is a Colombian born artist (1972) who currently lives and works in Brooklyn, NY. Betancurth’s mixed media works use themes from his own experiences to depict scenes, be it literal or figurative, that have been of significance in his life. Family dynamics, Catholicism, Santeria and Witchcraft are among the most common threads in his work. These subjects come together as symbols used to create a visually striking personal mythology that is dark, tender and satirical. Selected exhibitions include Dirty Looks On Location, NY; Sketchy Walk in collaboration with Todd Shalom, The New Museum, NY (both 2012); Chamber of Delights, El Museo del Barrio Biennial (2011); and Altar to Myself / Installation, Queens Museum of Art (2006).