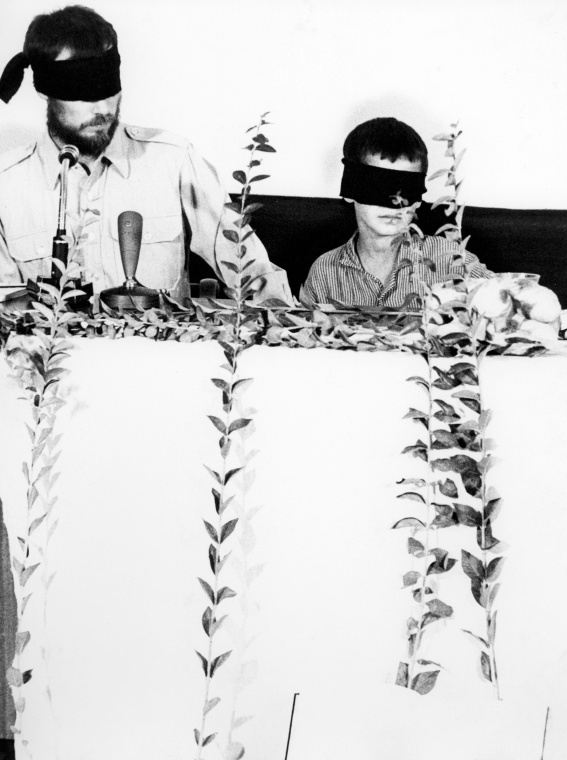 KA MOUNTAIN AND GAURDenia TERRACE: a story about a family and some people changing premiered at the annual Shiraz-Persepolis Festival of the Arts in Iran in 1972. The performance ran continuously for seven days and seven nights on and around the sacred Haft Tan mountain, featuring 168 hours of plays, dances and stories. The action began within the city’s historic ruins, moved to a main stage at the base of the mountain and continued up and down the rugged peaks, where audiences were invited to encounter the Byrd Hoffman troupe and Iranian extras from Pahlavi University performing continuous activity amid surrealist handmade props and two-dimensional sets. Dust storms, extreme heat, confusion, the need for sleep, and sheer distance kept many viewers away and added to the intended ambiguity of the work, which still resists a single view. The performance is preserved in the archive as a rich trove of fragments that begins with Wilson’s Yugoslavian notebook sketches from 1971, moves to his correspondence from his imprisonment in Crete (where he was held on charges of possessing marijuana for the month preceding the performance), and extends to a second performance of the work at the Musée Galliera in Paris following the festival, where one of his troupe members was reported to have gone mad from circumstances relating to extreme physical and mental exhaustion.

While ambiguity was Wilson’s intention, the capaciousness and seductive allegory of the performance, along with Wilson’s celebrity and the dramaturgy of his imprisonment in Greece, have so far distracted from a retrospective view that might consider the larger political climate of Iran at the time. This project looks at promotional material, correspondence between the festival organizers and press clippings from the 1960s to the present day to uncover the role the festival played in the hands of the imperial family, the Mohammed Reza Shah Pahlavi, and the fair’s patroness, Shahbanouh Farah Diba, who sought to modernize and industrialize Iran while preserving their country’s ancient traditions and artistic heritage.  The project will begin with a presentation of materials that frame the festival’s “East meets West” campaign alongside Jalal Al-e-Ahmad’s 1962 manifesto, Occidentosis: A Plague from the West, which introduced the term Gharbzadegi (translated as “Westoxification” and “West-struck-ness”) which took on popular usage and became the rallying cry of the Islamic Revolution in 1979.  Some of the first recorded Islamic political demonstrations started in 1975 at Tehran University, and the festival came under particular attack from religious revolutionaries who saw the event as proof of the country’s growing economic disparity and increased domination by non-Muslim foreigners.  The unrest grew worse until mounting pressure forced the Shah and his family into exile in 1979.  The final Shiraz-Persepolis Festival of the Arts took place in 1977; plans for the ‘78 fair were cut short, as were plans to build a new interdisciplinary Arts Center for the visual arts, sound, cinema, theater, ballet, poetry and literature that would be open year round and support exchange with international art institutions.   By ’79, the once forward-thinking, open-minded climate for experimental art had turned hostile and government funding for young artists to study abroad stopped.

The complex political, economic and religious ideologies at play quietly pervade KA MOUNTAIN’s archival materials and the performance itself. Images of the costumes and notes on the choreography find inspiration in romantic notions of everyday life in Iran, its spiritualism, music, dance, and ritual, all the while mixing with Wilson’s unruly mindscapes, dreamscapes and experiments in language.  The contradictory affects of Wilson’s work are echoed in the mixed reviews of his previous performances, described variously as “extraordinary freedom machine[s],” by Louis Aragon in 1971, and “designed to manipulate audiences,” by Richard Foreman in 1970. Ironically, Wilson’s performative tactics of control, audience command, word play, illustrative set design, and continual action employ many of the same tactics that the Shah used to maintain autocratic sovereignty, while simultaneously hosting and entertaining the elite international art world crowd that visited each year.

The 4x6 foot bulletin board display will change continuously over course of the exhibition, sometimes multiple times in one day, performing a temporal re-structuring of the archive.  The exhibition wonders whether the custodial gesture of daily change might inspire viewers to return with urgency, skepticism, or committed intrigue, or rather reinscribe an imperial desire to direct, command, impress and appease.