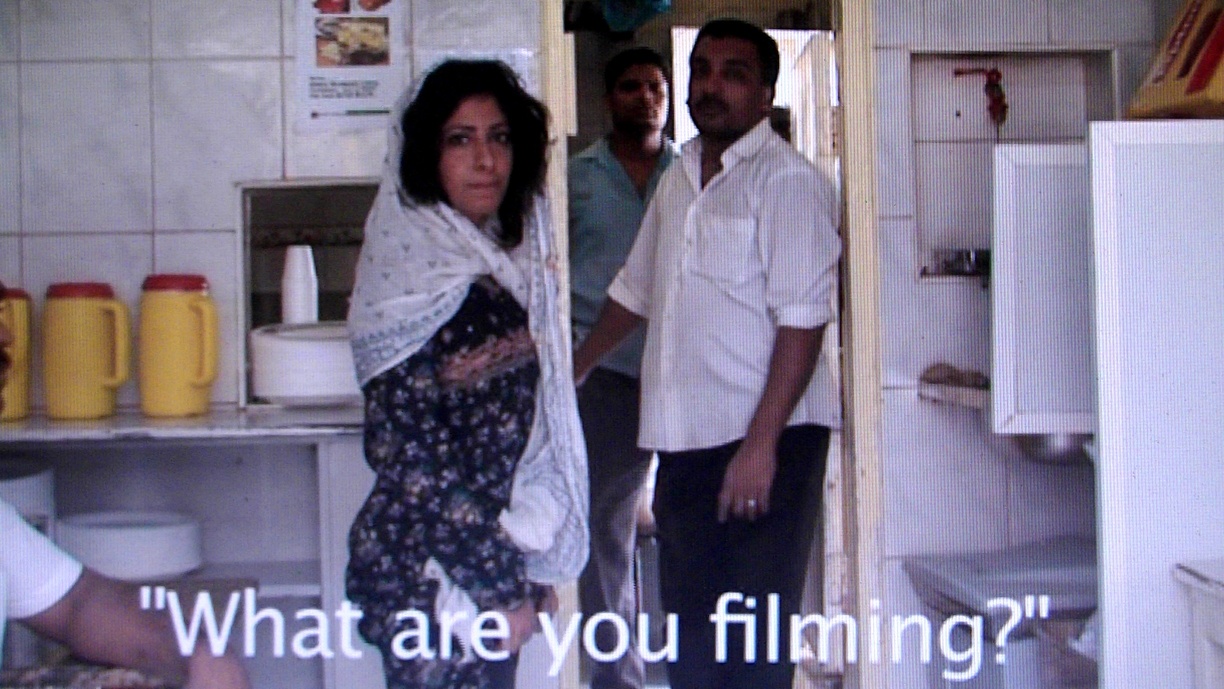 A green, well-manicured hill juts out in the middle of a congested roundabout. The grassy mound is decorated with an arrangement of flowers that spell-out the city slogan, SMILE YOU ARE IN SHARJAH. Coined by Sharjah’s municipality in the 1970s, the phrase is intended to encapsulate the spirit of this sunny coastal city on the Gulf in the United Arab Emirates.

Nada Dada updated her Facebook status recently: “I am going to make art today, lots of it.” She performs art daily. The hair that falls from her head and piles in the corner of her shower: that is sculpture. That video set: it’s produced from the artist’s rugs and scarves. Nada Dada’s bathroom is where she constructs, fabricates, and dismantles her images, stories, and the sets that produce them. Outside is where she gathers data for the next role she will enact and retell, the next narrative that she will make unfold. A virtuous mistress finds solace in the comfort of her leather handbags; a witch feeds her baby crow from the palm of her hand; the fun-loving princess finds time to giggle with the household help.

For the CCS Bard Bulletin Board, Nada Dada has captured images of the mundane and externally accessible elements that make up city life, and the internally clandestine—mostly absurd—existence of an unknown young woman. Here the images she presents are flattened onto one space and one spirit—“Smile, you’re in Sharjah”—a mishmash of discarded fruit on the street, laborers sporting orange street cones on their heads, the Emirati artist-cynic, the glare of the sun in dismal alleyways, lush patterns on draping shawls, weird masks and costumes. Switching between public and private we begin to trace a third possibility for existence at the periphery of each world. A third persona that observes, interacts, and attempts to measure up to the environment she encounters—the alternative to obtaining control and agency.

Nada Dada’s images present clips of an inconsequential day or two, or three. Shifting between streets, storefronts, a nest of eggs, and fresh produce; between, honey, guns, and feeding birds—Nada Dada frames and builds up a visual territory. A combination of portraiture, still life, and street snap shots are the mechanisms used to examine assumed roles and identities in her home and on the alleyways and streets of Sharjah.

Each image in this series is accompanied by a narrative composed by the artist. Viewers are invited to take a print of their choice.

Nada Dada is an artist living in Sharjah, United Arab Emirates. She received her BFA from the College of Fine Arts and Design at the University of Sharjah in 2011. She has exhibited her work in The Graduates (2011), The State: Social/Antisocial? (2011) both at Traffic Gallery in Dubai, UAE and Winter/Spring 2011 Brief Histories (2011) at Villa K30 in Sharjah, UAE.

Below is a text written collaboratively by Fawz Kabra and Nada Dada in the form of an interview.

Fawz Kabra: How did you start visually representing your ideas? What were the precursors?

Nada Dada: It all started from the bathroom. I would imagine little people. They were enemies, fighting each other but they looked the same. I would also see a man and a woman. The man looked realistic, with defined lines and structure. The woman looked soft and sensual, almost blurry and indistinct. I knew at the time that you couldn’t have one without the other.

FK: The bathroom in the pictures is real. It seems that several characters inhabit your domain. Are they real?

ND: In the bathroom, I am a witch, a battered wife, and a girl who sometimes befriends a few demons. It is very feminine not feminist: water, eyeliner and a tree of knowledge. Violence won’t erupt as long as the Jinn keep perfectly still in my domain. This all happens while the camera is going. It is very safe there. The patriarchy is gone, the authority does not exist.

FK: How do you put together the narratives that structure your images, what are they based on? And, what changes when you leave the environment you’ve created in the bathroom?

ND: It is based on water. It is the water’s age. The water has different faces and names. It makes friends with the air and chats with the melting flowers. It holds no allegiance to color. It can burn you and it can soothe you. Rocks should fear water. Water has been around longer, it flows in a river, in a pipe and in a vein. It recites the stories that humans have left. Water can proudly claim that it is surely older than time. Yet, why are rocks worshiped and water is forever aligned to the rusty pipes?

When I step out and leave the porcelain I enter the man’s world, which is Sharjah. It is brown, yellowish and sometimes funny. Just like the man I saw in the bathroom. Sharjah is brown, yellowish, and surely realistic. The sun when it’s hot, injects anger on your neck. “Why are you angry, sun?” The man replies, “Because there are lots of people who sin, we must pray for rain and God’s forgiveness.”

FK: How would you describe the outside, the space beyond the porcelain?

ND: I have no face in that place, but it has an absolute, defined topography. It is a carefully made carpet from different colors that are entwined at the edges. They represent the others who sail from nearby lands. I however, am the flying thread, not really needed in that scenery because the carpet has already been made.

I look for water in Sharjah, somehow it is not as feminine. I find it in bottles, running from air conditioners, dripping on the ground. I cannot find it in its pure form: sophisticated. It is rather artificial and polluted.