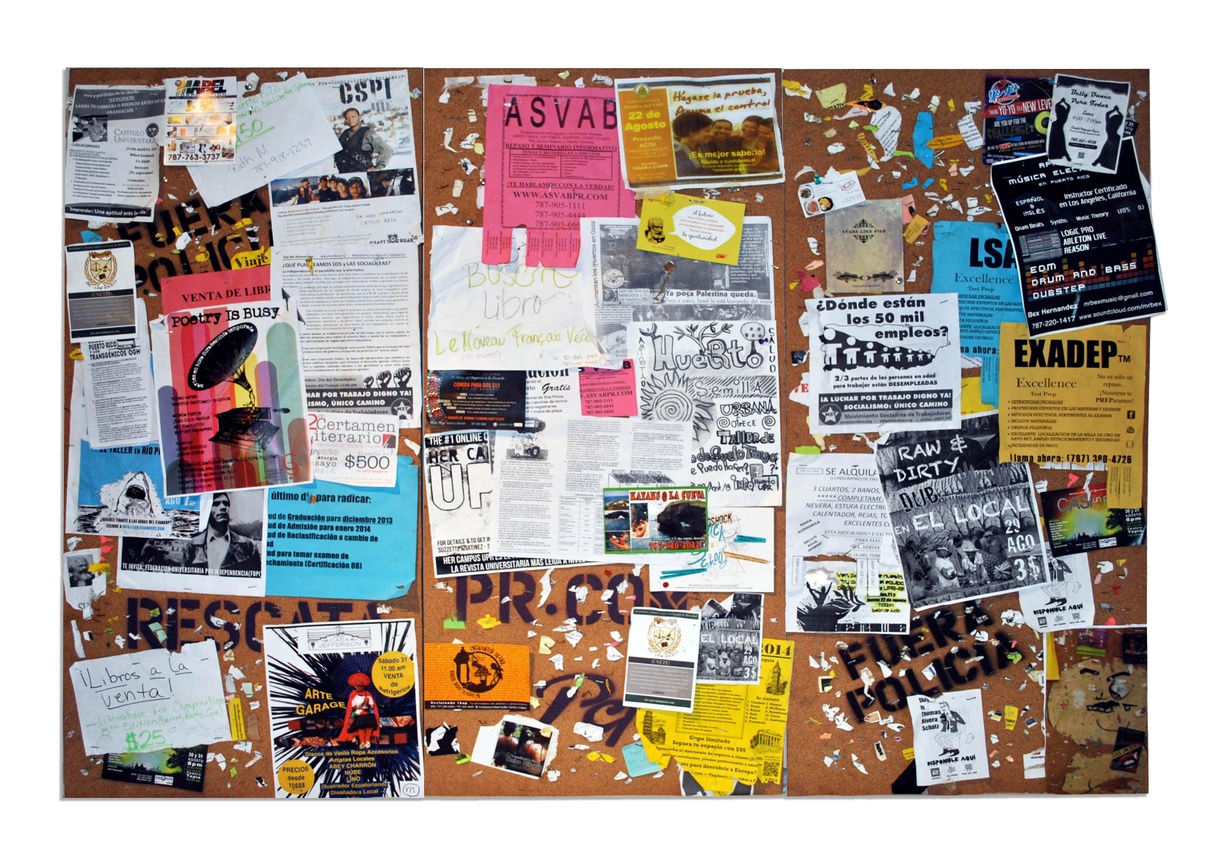 Space is often apprehended in abstract terms, in its negative reciprocity to objects, or in its phenomenological dimension. Place, on the other hand, is constructed through specificities, the complex networks between peoples and sites, and the relations produced in the spaces between them, often mediated through the lens of social and political conditions. It is in these relational linkages where both space and place coincide; movements that prescribe exchanges and conversations that often leave material traces of processes and events. Here, the event is not only an action in space and time, but a precise materiality that embodies the notion of site-specificity in a procedural dialectical exchange.

Nothing in common, but a lot in common by Jesús “Bubu” Negrón is an encounter that addresses the context of a bulletin board in two different sites, the Center for Curatorial Studies at Bard College (CCS Bard) and the University of Puerto Rico (UPR). These sites function as both spaces and places, emphasizing institutional, cultural, and political relations of difference, while simultaneously addressing the status of the object within the discourse of contemporary art. In Nothing in common, but a lot in common , Negrón performs and repositions the object, displacing it from its originary context and reproducing meaning. It consists of two bulletin boards in two different places, Puerto Rico and New York, an encounter mediated by Negrón, where a functioning bulletin board becomes an art object, and an art project is installed on a functioning bulletin board. Here, an encounter is effected that delineates relations of difference but also of correspondence. The accrued layers of old staples, residues of torn paper, flyers, and stenciled surfaces speak not only of the political and social specificities of the site, but also of the repeated collective impulse of local networks that reach painterly and abstract aesthetic forms. It becomes, then, an urban archeological repository of the site’s historical memory that reveals the site’s cultural and political specificities, i.e., its colonial status vis-a-vis the U.S., reactions against police brutality, and linguistic hybridity.

To produce the work for the CCS Bard bulletin board, Negrón collaborated with students at the UPR to reproduce a local bulletin board, transposing it to CCS Bard as on off-site of a temporal and collective event. As part of this encounter, Negrón installed at the UPR the previous project on view at the CCS Bard bulletin board The Innocence of Looking at Hills by Los Angeles based artist Gilda Davidian, curated by CCS Bard graduate student Sarah Higgins. Unlike the bulletin board space at CCS Bard, which has only been used for art projects, the space at the UPR has been utilized solely for institutional purposes, serving as a liminal space between students and the institution. Now repurposed to contain Davidian’s project -images from and of a family archive circulated through various generations of Armenian diaspora- the UPR bulletin board becomes a receptacle for the reproduction of cultural difference. Similarly, Negrón’s project is a reproduction and a reassembly of a bulletin board built collectively, reinforcing the notion that the readymade is not merely an existing object, but a repetition and a reposition.[1] In this context, site and object are not only determined by their physical properties, but by a collaborative act, i.e. the encounter, and the relations that inform its presence.

Negron’s project reiterates some of the most fundamental questions in contemporary art on the object since Marcel Duchamp attempted to exhibit Fountain in 1917, mainly, what can art potentially be and how does context ultimately produce the art object. The physical and material conditions of the readymade are often understood as an already existing object from the world, a thing or a commodity displayed in an art context. The readymade, however, is more of an encounter between the artist and an object, an event suspended in space and time, or what Duchamp has defined as a rendezvous.[2] This interpretation of the readymade highlights the ways in which information is exchanged, and images produced and circulated.

In Nothing in common, but a lot in common , “the site is conceived not only in physical and spatial terms, but as a cultural framework defined by the institutions of art.”[3] If we are to include educational institutions in this definition, the object has the potential to reveal the ideological underpinnings of its context, breaking the structural hermeticism of the institution. If the bulletin board is an ideological space, much like any other, synthesizing the ethos of the community it serves, then its repurposing in the context of art can collapse distant sites, privileging an encounter, a relation, and a process.

Jesús “Bubu” Negrón is an artist living and working in San Juan, Puerto Rico. His work is characterized by site-specific interventions, the re-contextualization of everyday objects and a relational approximation to artistic production as a revealing act of historical, social and political proportions. His work has been exhibited at the Sharjah Biennial (United Arab Emirates, 2007), Whitney Biennial, Day for Night, curated by Chrissie Iles and Philippe Vergne (New York, 2006), Torino Triennale Tremusei, curated by Franceso Bonami and Carolyn Christov-Bakargiev (Torino, 2005), and the 2nd Trienal Poli/Gráfica de San Juan (2009), curated by Julieta González and Jens Hoffmann, among others.

[2] This reevaluation of Marcel Duchamp’s readymade is championed today by David Joselit in his book Infinite Regress in which he discusses repetition as a revivification of meaning.

[3] Kwon, Miwon. “Genealogy of Site Specificity.” In One Place After Another: Site-Specific Art and Locational Identity. Cambridge, Mass.: MIT Press, 2002. 13.