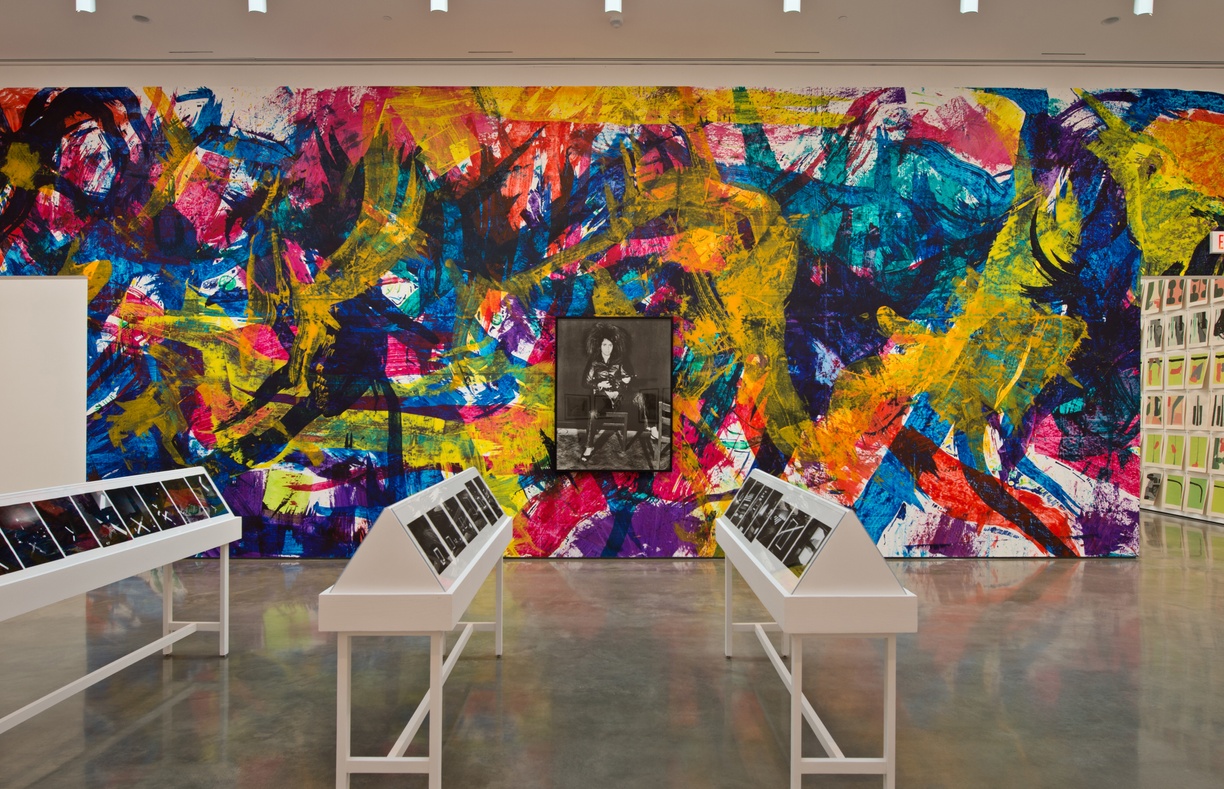 When invited to curate from the Marieluise Hessel Collection at the Center for Curatorial Studies at Bard College (CCS Bard), Amy Sillman and Cheyney Thompson established the notion of a score as an initial prompt for looking through the collection.   Starting with works by artists Nicholas Africano, William Copley, VALIE EXPORT, Imi Knoebel and Ilene Segalove the curators expanded the exhibition with additional works on loan by John Cage (from Bard College’s John Cage Trust), Carolee Schneemann and a new painting by Cheyney Thompson created specifically for the exhibition.

A score can imply sequence, status, sex, folding, splicing, notation, ratio, or gamesmanship - or punningly, several of these at once.  The project began as a search for works which embodied this hinged and polymorphous overlap, such as sex + system, or notation + action.  A primary focus is the art of the 60s and 70s, since this is a period when artists often employed systems to rethink method and form.  However, Sillman and Thompson also attempted a twist on the more productive implications of a score by foregrounding a counter-narrative of uncertainty or negativity in this exhibit. The various works in this exhibition point both at systems and their breakdowns: awkward or arbitrary interactions, the intrusion of affect, unlikely spaces.  A multifarious kind of score therefore emerges in the show itself through the interactions of the sensual and the systematic, the rigorously logical and its flipside, an underlying not-knowing. The most interesting place for Sillman and Thompson is the point where dictation and classification break down, where losers are winners, subjects are objects, and the audience is implied in the choreography of the art.

The works of both Nicholas Africano and William Copley feature straightforwardly drawn figures portrayed in intimate or awkward confrontations, both day-to-day and dreamlike.  Copley’s figures are “scoring” in the classic, euphemistic sense: getting it on or suggesting that they soon will.  Africano’s large painting, Photographing, 1977 is a pictorial outline of a charged moment between two figures confronting each across a blank field.  John Cage is best known for his use of chance operations, but in fact he often plotted out the operations of his artwork and performances via complicated preparatory notations that he called scores.  Shown here are the score and video of his early work performed on television, Water Walk (1959), courtesy of the John Cage Trust at Bard College.   Carolee Schneemann’s ABC- We Print Anything– In the Cards (1976-1977) is also literally a score for a performance-projection work of Schneemann’s, but is presented here in its iteration as a four-part wall grid, a complex interweaving of structural and intensely personal elements composed of dream fragments, overheard language, descriptions of interactions between lovers, and the choreography of interior spaces.  Imi Knoebel’s black and white photographs, Projektion 1, 1968 , record a similar set of complex happenings, but with quite a different set of conditions: simple, day-to-day objects like string and mirrors are arranged and re-arranged serially with light, mirrors, reflections and windows in various public spaces which seem strangely abandoned and unpopulated.  In the works of Ilene Segalove , the space is defiantly personal: the figure of the artist herself is portrayed as a comic feminist protagonist who seems perpetually unable to assimilate to various pictorial or archival standards.  The body is also the key site for VALIE EXPORT , who makes her own body into a form of corporeal marking through the streets of Vienna, or the site of a provocative confrontation between herself and her fictive adversaries. Cheyney Thompson’s work is often based on elaborate systems used to generate paintings; here he provides a pattern as a form of activated wallpaper, covering an entire wall of the exhibition and serving as a backdrop for one particularly iconic VALIE EXPORT self-portrait, Action Pants: Genital Panic, 1969-2001.

SCORE! is on view in the Hessel Museum of Art in conjunction with Amy Sillman: One Lump or Two, curated by Helen Molesworth, Barbara Lee Chief Curator at The Institute of Contemporary Art/Boston (ICA).

Amy Sillman is an artist whose paintings, drawings, and animations actively negotiate interactions between abstraction and figure, language and image, feeling and form.  Her work has been shown regularly at museums and galleries for the past two decades, including The 2014 Whitney Biennial, and in December 2014 she will participate in a group show about painting at MoMA in NYC.  Sillman has been the recipient of numerous awards and fellowships, including a Guggenheim Fellowship, a Louis Comfort Tiffany Award, and the Pollock-Krasner Grant.  For many years a resident of Brooklyn, NY, Sillman will spend much of the next year traveling.  In the fall of 2014 she will be a Resident at the American Academy in Rome, and in April 2015, she will begin a stint as Professor at the Städelschule in Frankfurt.

Cheyney Thompson‘s work involves the exploration of systems as they relate to art production, the apprehension and distribution of art, as well as personal interests and lived experience. Using different color systems and ways of organizing space, his paintings and sculptures negotiate the contemporary experience of time, labor and the body. Thompson has had solo shows at the MIT List Visual Arts Center, the Kunstverein Braunschweig, Andrews Kreps Gallery, Campoli Presti Gallery, and Galerie Daniel Buchholz. His work has also been included in numerous international venues including the Museum of Modern Art and the Whitney Museum of American Art in the United States, the Tate in England, and the Langen Foundation in Dusseldorf. His work can be found in the collections of the Museum of Modern Art and Le Centre Pompidou.