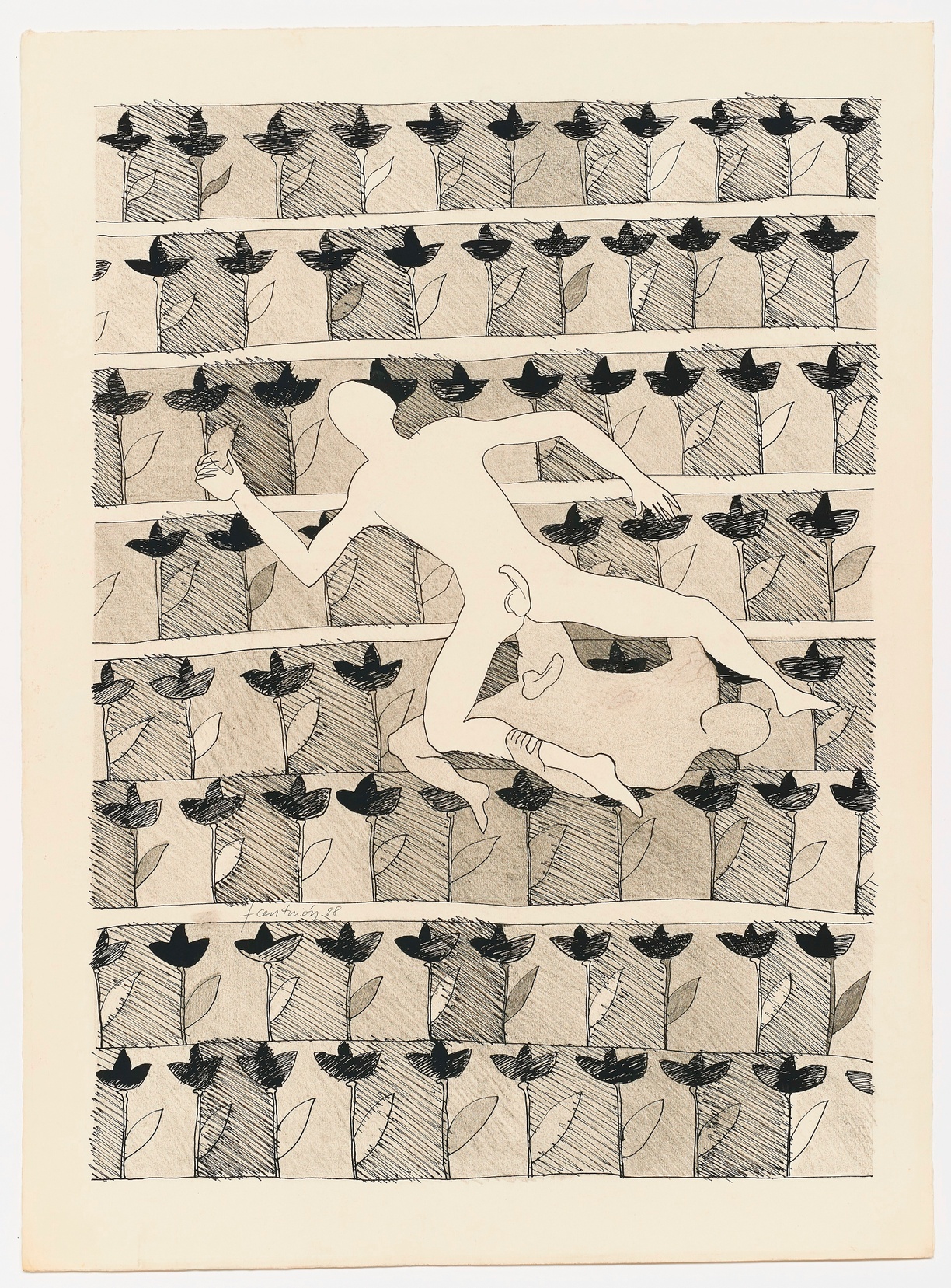 Ñande Róga means “Our Home” in Guaraní, the primary language spoken in Paraguay since before colonial conquest. This language has two different ways of addressing the first-person plural. Ñande refers to an inclusive “we,” where everyone participates, whereas ore implies that some member of a social group has been left outside. This difference, which is absent in both Spanish and English, reveals an insightful understanding of community and belonging.

Inspired by this notion of collectivity, Ñande Róga reflects on the work of the Paraguayan artist Feliciano Centurión (b. 1962, San Ignacio, Paraguay; d. 1996, Buenos Aires, Argentina). His practice was profoundly influenced by the countryside of Paraguay, the underground cultural scene of Buenos Aires in the 1990s, and the queer and gay movements of post-dictatorship Argentina. By dwelling within and among the resonances of his various communities and interest in local crafts such as ñandutí textiles, his works evoke ideas around domesticity, care, healing, and spirituality.

On view December 2 – 12, 2021, in the Collection Teaching Gallery at the Center for Curatorial Studies, Bard College, the exhibition combines drawing, textile, and sculptural works with materials from Centurión’s archives, many of which have not been previously published or shown in a public exhibition. These materials provide a multifaceted perspective on Centurión’s studio practice, as well as his relationships with other artists and thinkers working in Buenos Aires and Asunción in the 1990s. For Centurión—a gay man living through the most tumultuous years of the AIDS crisis—the bonds of friendship made during this period were a powerful grounding force in both his work and his life. It is clear from the works and archival ephemera presented in Ñande Róga that Centurión’s work existed within that inclusive “we.” This linguistic nuance fueled the development of an exhibition system composed of concentric circles, with original artworks in the center and a perimeter of facsimiles (press clippings, documentary photographs, and notes) drawn from the Centurión archive at the Institute for Studies on Latin American Art (ISLAA) in New York City.

The artworks, archival materials, and ephemera in Ñande Róga provide new perspectives through which to view the life and practices of Feliciano Centurión and his artistic communities.

Ñande Róga results from a graduate seminar at the Center for Curatorial Studies supported by the Institute for Studies on Latin American Art (ISLAA), which advances scholarship and public engagement with art from Latin America. The course at CCS Bard College marks the inaugural ISLAA Research Seminar Initiative, centered on artists or movements whose archives are among the special collections at ISLAA. Students activate these materials in dynamic curatorial contexts to present multifaceted research-based exhibitions on Latin American art and artists.