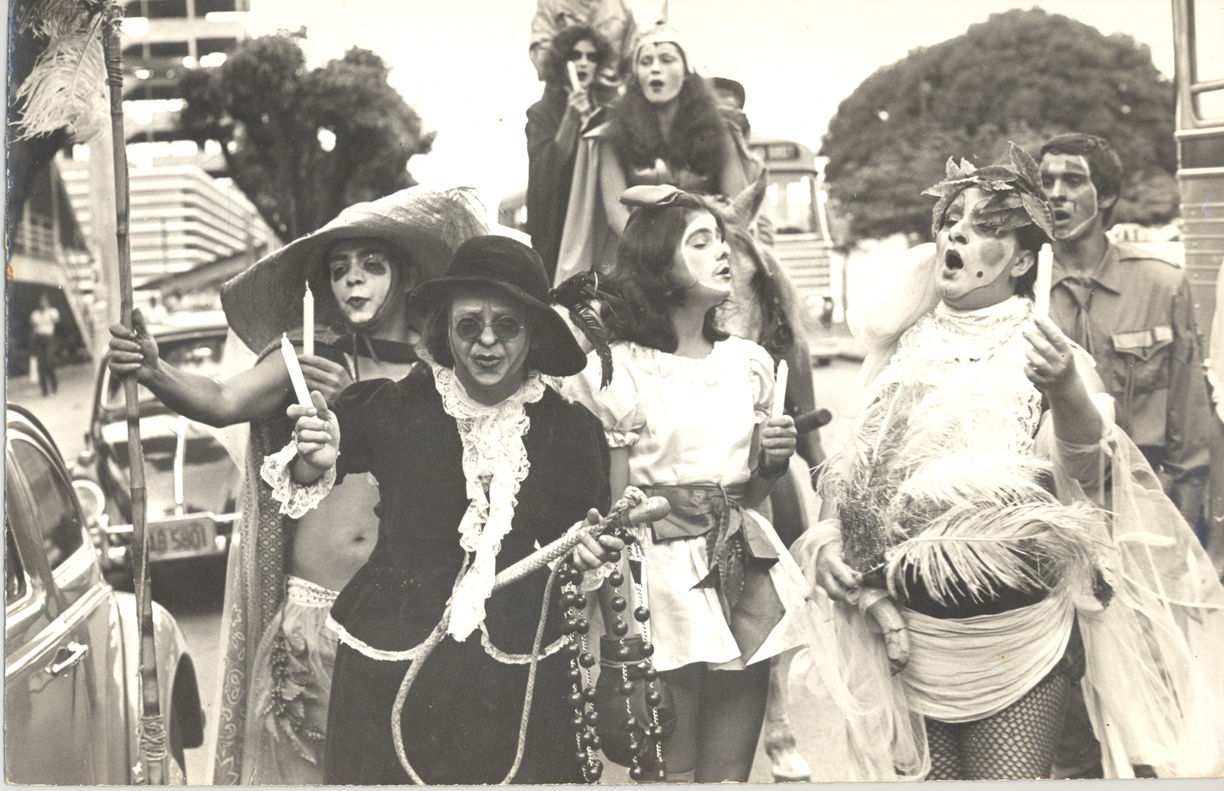 Abra a Jaula! is the first institutional presentation of video works by the Brazilian-based avant-garde theater company Teatro Oficina (1957–).

The title Abra a Jaula! comes from playwright and poet Oswald de Andrade’s O Rei da Vela (1933). Staged by Teatro Oficina in 1967 during Brazil’s military dictatorship, the play tells the story of the Candle King, Abelardo I, a cruel loan shark who exploits the debts of the victims of the economic crises of the 1930s. Abelardo traps his clients in a literal cage, which is revealed through the command “Abra a jaula!” (Open the cage!).

The exhibition operates similarly to this command: revealing the material so that the audience may confront it. By presenting previously censored videos, films, and archival materials, Abra a Jaula! aims to reveal the conditions of production of Teatro Oficina’s repertoire and its continued relevance.

Teatro Oficina has been exemplary in its enaction of methods of artistic resistance against authoritarian repression. From its beginning, the company’s founder and director, José Celso Martinez Corrêa (a.k.a Zé Celso), produced films and video documentation that operate as an expansion of the group’s performative practice, extending it beyond the stage. This exhibition focuses on two phases of Teatro Oficina’s video production: during political exile in the 1970s, and following the company’s return to Brazil in the 1980s. These periods mark Teatro Oficina’s initial explorations into subverting media genres, an operation that remains central to its practice to this day.

Abra a Jaula! presents the three main audiovisual genres Teatro Oficina has attempted to destabilize throughout its history: the propaganda film, the TV broadcast, and the performance film. In the works from the 1970s, O Parto (1975) and 25 (1975), Teatro Oficina respectively documents the Carnation War, a 1974 anti-authoritarian military coup in Portugal, and the Mozambican liberation movement. Through interspersing archival photographs, broadcast news clips, music from Mozambique, the United States, and Brazil, and multilingual voice narration in short succession, the company creates works that use the language of national propaganda to develop an international network of decolonial solidarities. In the 1980s, Teatro Oficina shifted its attention to broadcast TV, when Brazil’s largest biggest TV personality, Silvio Santos, attempted to buy the company’s theatrical space to build a luxury apartment building (a dispute that remains unresolved).

For Abra a Jaula! (1983) and Caderneta de Campo (1983), Teatro Oficina used U-matic video cameras to produce records of the theater company’s daily activities. These activities include censorship hearings, public demonstrations, samba school practices, company performances, and the demolition and reconstruction of the theatrical space, all edited as if meant to be shown as a TV broadcast.

The group’s first performance film, O Rei da Vela (1982), toys between being a performance film, rehearsal documentation, and daily video log of mundane occurrences. Filmed in U-matic and Betacam, the film is the first instance of the camera becoming a fully integrated character in Teatro Oficina’s performances, a practice the company has continued to use in every performance since.

Together, these videos and archival materials provide insight into the history of one theater company’s ongoing commitment to art, resistance, and liberation. In its presentation of them, Abra a Jaula! aims to illuminate the possibilities and underscore the urgencies of ongoing artistic resistance, both in Brazil and around the world.