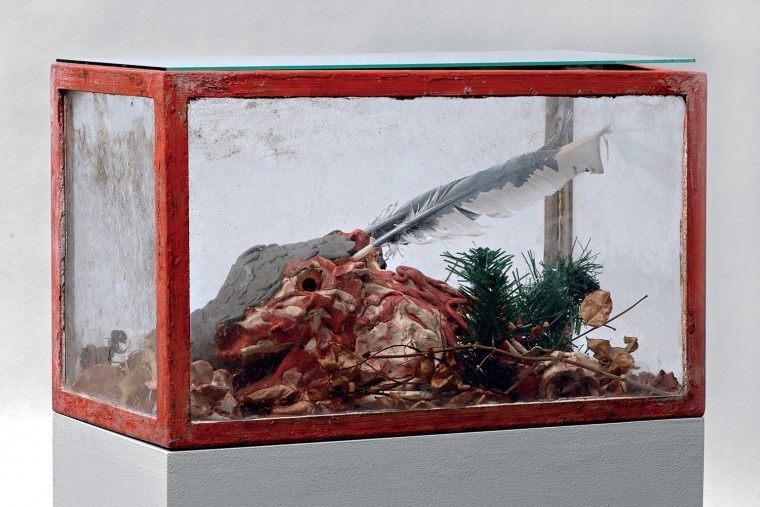 Inbetweener explores modeling as a frame to understand how artists, technicians, and animators engage in the construction of virtual bodies and volumes. With a particular emphasis on embodiment, the exhibition presents a continuum of modeling that ranges from ceramics and video game graphics to animatronics and horseshoes.

A significant portion of the bodies we see on-screen and in popular culture are virtual—neither physical nor photographic. Built through extensive processes involving software and skilled and collective labor, these virtual bodies are “modeled”—represented as if they are three-dimensional by the mathematical equations that compose them. Modeling predates computing considerably, and its material processes have long been central to the production of visual culture. In particular, representations of the body play a fraught and important role in shaping expectations of visuality for new technologies and the subjectivities both depicted by and taking shape within them. This expectation holds true for the contemporary production of virtual forms, which introduces new protocols that differ radically from those of hand-drawn animation and cartoons. That is, in order to produce a three-dimensional appearance out of two dimensions, digital animators must simulate the effects we associate with objects in the lived world. They must articulate the points where distinct elements connect—such as appendages to the body—and they must assign quantifiable material qualities, like mass and texture, to those elements. In other words, animators must give joints and weight to wholly virtual bodies or forms. As a result, these virtual volumes appear to have uncannily corporal qualities of fleshliness, wobbliness, and heft. The end results of this complicated modeling process are the images and avatars that now constitute some of the most familiar elements of contemporary visual culture, from video games, to blockbuster films, to advertising. Modeling has thus generated a unique set of aesthetic qualities and representations of corporality and embodiment that we consistently, but unconsciously, watch in the world.

Inbetweener presents modeling as an emergent visual form whose cultural consequences we are still grappling with and traces the effects that techniques of modeling the body have had on artistic production over the past fifty years. Contemporary artists working with modeling have made a significant contribution to social space and visual technologies by sculpting what we cannot see, building upon a long history of forms that leave their given frames of representation. In examining the impact of robust computing power and “naturalistic” simulation on the modeling process, Inbetweener considers the stakes, limits, and unexamined qualities of modeling as a mode of approaching embodiment and corporeality—a mode that artistic practices have uniquely complicated.

Through a combination of artworks and non-art objects, the exhibition poses a gestural and open field of inquiry through material. Works by Rosa Aiello, Cosima von Bonin, Gaylen Gerber, Robert Lazzarini, Giulio Paolini, Andrew Ross, Susan Rothenberg, Rio Roye, Pascual Sisto, and Paul Thek look at the role of artworks in anticipating strategies of technical imaging. Alongside these artworks, Inbetweener incorporates non-digital forms of modeling and rigging, including glassware, gaming hardware, and animatronics. Taken together, the exhibition looks at the negotiations between what gets crystallized into an image and what kind of subjects are formed out of them.