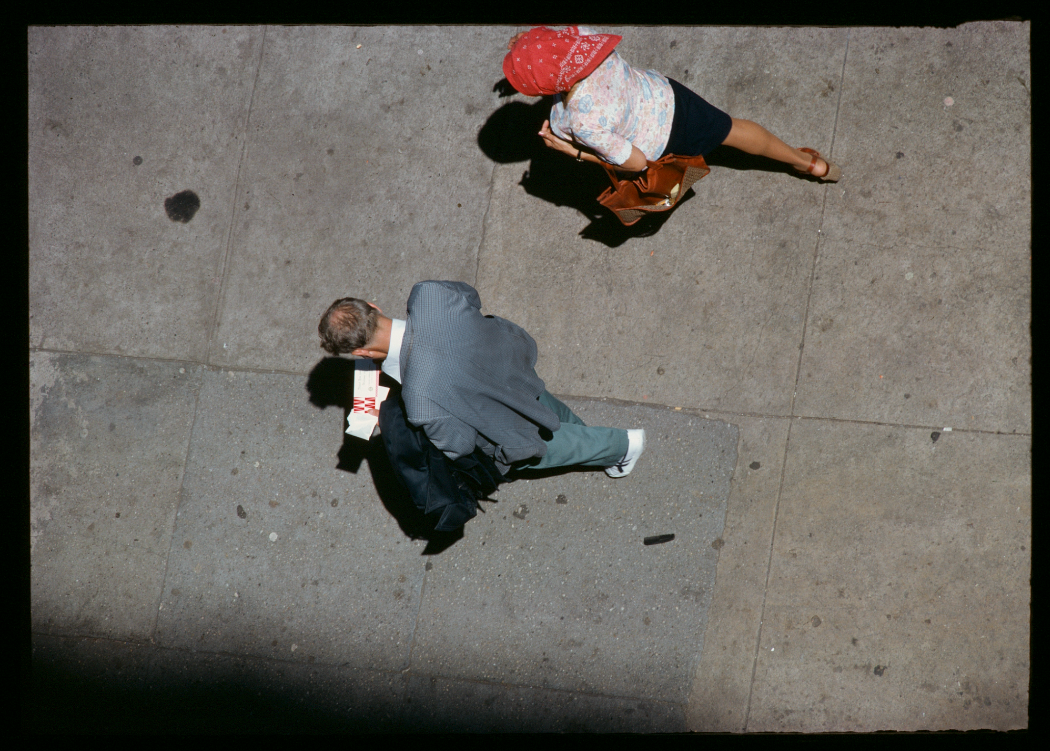 A lifelong New Yorker, artist Bettina Grossman (1927–2021) lived and worked for nearly fifty years at Manhattan’s storied Chelsea Hotel. From 1977 to 1984, Bettina—who went by her first name only—documented the flow of pedestrians on 23rd Street. She would shoot over 8,000 35mm color slides from her balcony, explaining: “I am documenting daily urban activities in fixed focus from the fifth floor. The pavement grid structure becomes the universal constant within which inner city energies are contained.” Bettina sorted these images into categories such as “deliveries,” “joggers,” “loaded,” and “umbrellas.”

The artist produced many works in various media that drew on this photographic practice, giving them all the common title The Fifth Point of the Compass. The particular series The Fifth Point of the Compass, New York A to Z, studies in random constant, demographics of 23rd street comprises nearly 1,100 slides. Presented for the first time in its entirety, the series forms the exhibition’s centerpiece and demonstrates Bettina’s rigorous attention to repetition and pattern.

Bettina worked across print, sculpture, film, drawing, photography, text, and more, with each work emerging from various systematic, prolonged processes. The exhibited works illuminate the artist’s interest in the discovery of recurring form, as well in the unseen currents guiding city life. Alongside art history and the work of her contemporaries, Bettina was influenced by her informal studies in mathematics and physics, as well as by mysticism and her Orthodox Jewish upbringing.

This exhibition—the first institutional solo presentation of Bettina’s work in the United States—is organized in collaboration with the steward of Bettina’s estate, artist Yto Barrada, who has been instrumental in reviving interest in the artist’s work over the past few years. Related works surround New York A to Z, accompanied by archival documents that ground the artist’s practice in her own words, in her life at the Chelsea Hotel, and in the New York City art world of the 1970s and ’80s.